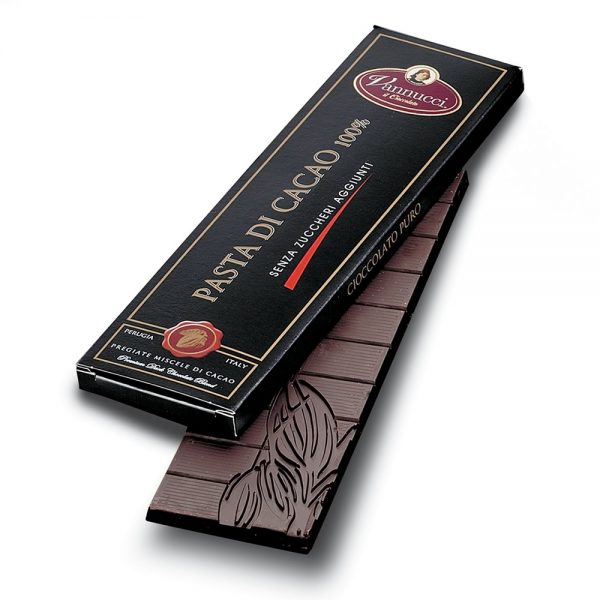 Bitter, dry but not astringent.
Sugar and gluten free: highly sought after.

Methylxanthines: these substances are miorelaxing and they stimulate cardiac activity. They increase level-attention and concentration capability, promote a better resistance of skeletric muscle at work and reduce the sense of fatigue.

Phenylethylamine: this substance boosts the effects of Dopamine, retards the sense of fatigue, alleviates the hungry sensation and favours wake.

Anandamide: is a neurotransmitter, synthesized in brain cells, and it has psychotrope effects. An “anti-stress” function, similar and auxiliary to the function of endorphine, can be supposed. It has antioxidant, hypotensive, immunomodulant, anti-inflammatory and analgesic properties.
The already known presence of other compounds was confirmed. They are:
Poliphenols, Tannins, Flavonoids (epicatechine…): good anti-oxidants. They favour a better bloodstream (boostering functions of all biologic systems), tone and elasticize the walls of blood-vessels, contrast degenerative pathologies (especially, cardiovascular pathologies).

Furthermore, cocoa:
Doesn’t induct caries, because it contains Tannins (that reduce bacterial proliferation), Fluor (that enforces teeth structure), Phosphates (that modifies the production of acids, resulted from sugar metabolism).
Isn’t contraindicated in case of colyte (the presence of Tannins alleviates intestinal contractions and the symptoms of irritable bowel syndrome.
Has more Iron than red meat and eggs.
Is easily digestible (cocoa mass is stored in the stomach for 1 or 2 hours).
Isn’t contraindicated in case of diabetes (the presence of Poliphenols provides an higher insulin-sensibility and a lower insulin-resistance).

Recommended dose, method and timing of administration
Take at least 30 grams of 100% cocoa mass: 10 g after breakfast, lunch and dinner, up to 100 g per day in the context of a mildly reduced calorie diet.

100% cocoa mass should not be chewed, dissolved slowly but left along the roof of your mouth to avoid the initial sensation of dryness and, instead, be invested by the complexity of its aromas. It thus prolongs the perception of bitter-sweet, fruit and spice, balanced by a mild acid mixed with a fragrance that lasts for several minutes, leaving finally a pleasant aromatic aftertaste and well defined.

It is well known that cocoa paste is dry and bitter, with high levels of astringency that are usually not greatly appreciated.

Vannucci adopted a technique that allows to attenuate, if not even cancel, the astringency level becoming the cocoa paste dry and bitter but with an excellent aftertaste, which makes it delightful both consumed alone and with wine or liquor.